The American Redstart Setophaga ruticilla is a distinctive bird, males being orange and black, and females yellow and black. The dissimilar colouring between the sexes of these little warblers is due to differing carotin levels in each. These unmistakeable winter residents are common on Abaco and in the Northern Bahamas generally. They are an easy warbler for new birders look out for, being unlike any other small warblerish-looking bird. All the birds here were photographed on Abaco.

The American Redstart (f  & m) as depicted by JJ Audubon

WHAT DO I LISTEN OUT FOR?

Photos taken on Abaco by Gerlinde Taurer, a major contributor to “Birds of Abaco”

Photos taken on Abaco by Gerlinde Taurer, a major contributor to “Birds of Abaco”

The MANGROVE CUCKOO (Coccyzus minor) is one of three cuckoo species found on Abaco and in the wider Bahamas. The yellow-billed cuckoo is another; and the noisy black smooth-billed anis are cuckoos by species though not in appearance.

You will notice that some of the birds shown have got fat insects in their beaks. Their preference is for caterpillars and grasshoppers, but they are happy to eat other insects, spiders, snails, lizards and (with a nod to an all-round healthy diet) fruit. 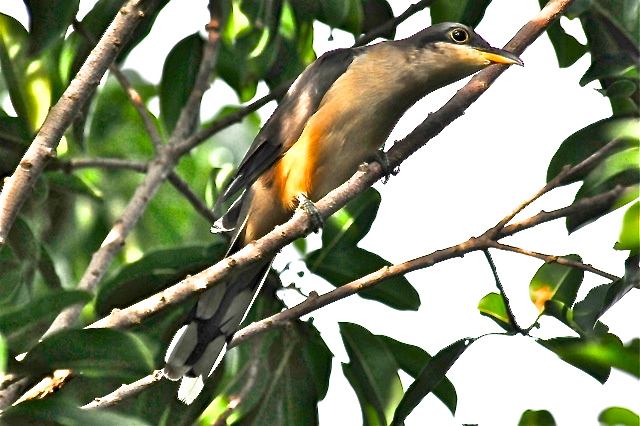 These cuckoos are shy birds and fairly hard to spot in the coppice unless they are on the move. You may see one flying across a track ahead of a vehicle, flashing its distinctive tail. Here are a couple of recordings of their call, described in various ways, for example as “gawk gawk gawk gawk” or “gauk gauk”. I’m not sure I hear it quite like that but I can’t think of a sensible way to write it out phonetically… 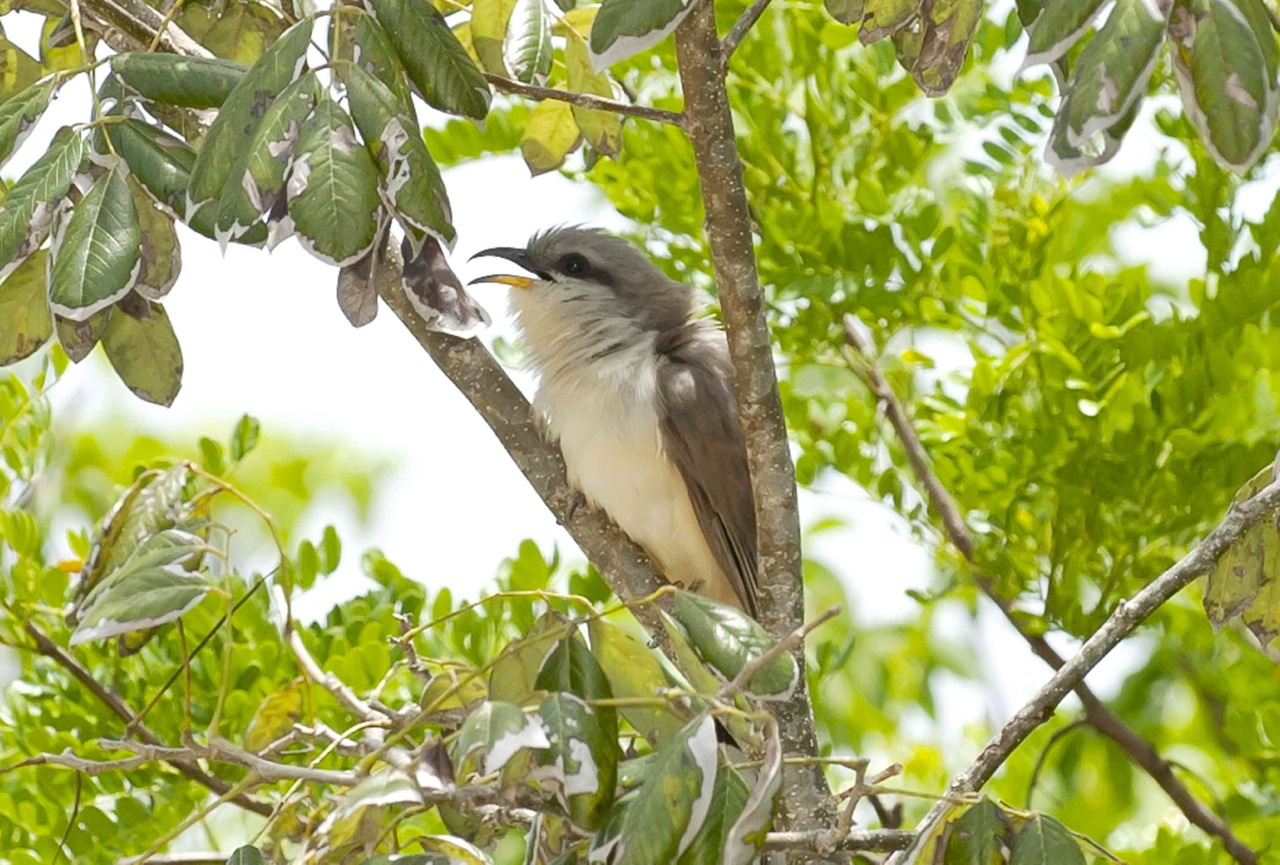 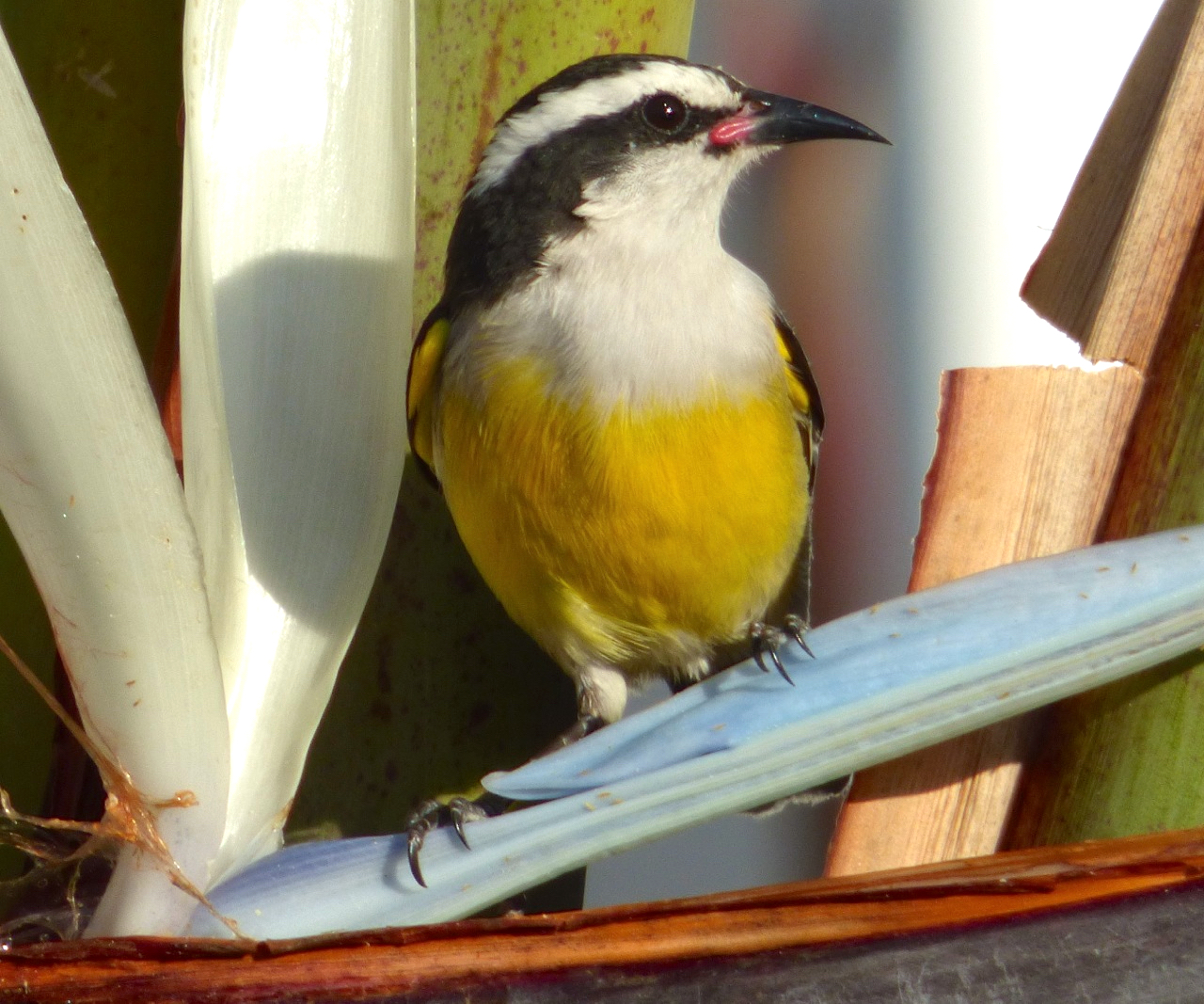 BANANAQUITS: AHEAD OF THE CURVE?

Bananaquits (Coereba flaveola) are small, colourful, and delightful birds of the coppice and garden. Besides their obvious attractiveness, the birds have in recent years enjoyed an uniquity: the status of being the sole species in the family Coerebidae. 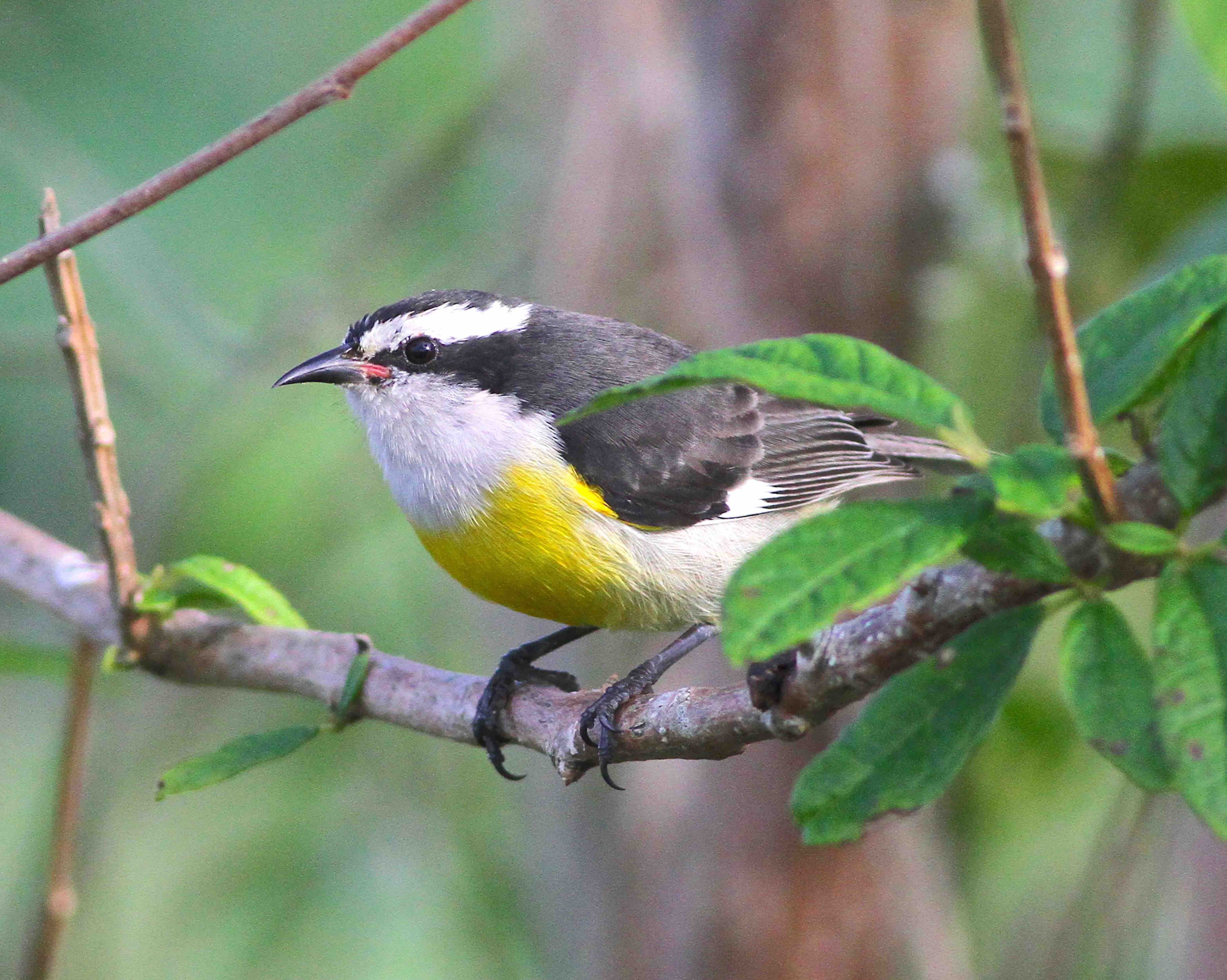 However this singular status has really been a kind of avian parking place due to past, present (and doubtless future) uncertainty of the right category for these birds. Like so many avian species these days, they are subject to the rigours and vagaries of continual reclassification by the ornithological powers-that-be.

Bananaquits are, broadly speaking, passerines – essentially birds that perch. The nominal ‘passer’ was specifically awarded to sparrows by BRISSON, a contemporary of Linnaeus. Recently, bananaquits have suffered mysterious migrations of their classification ranging from the generalised ‘passerine‘ to the vague incertae sedis (= ‘uncertain group‘) to uncomfortable inclusion with tanagers / emberizids.

The debate over the appropriate classification for this pretty little bird (of which there are many subspecies in the broad Caribbean region) – rumbles on. A new way to confuse the issue is the suggestion that the bananaquit should be split into 3 species. In some areas, I believe this has happened at least informally. 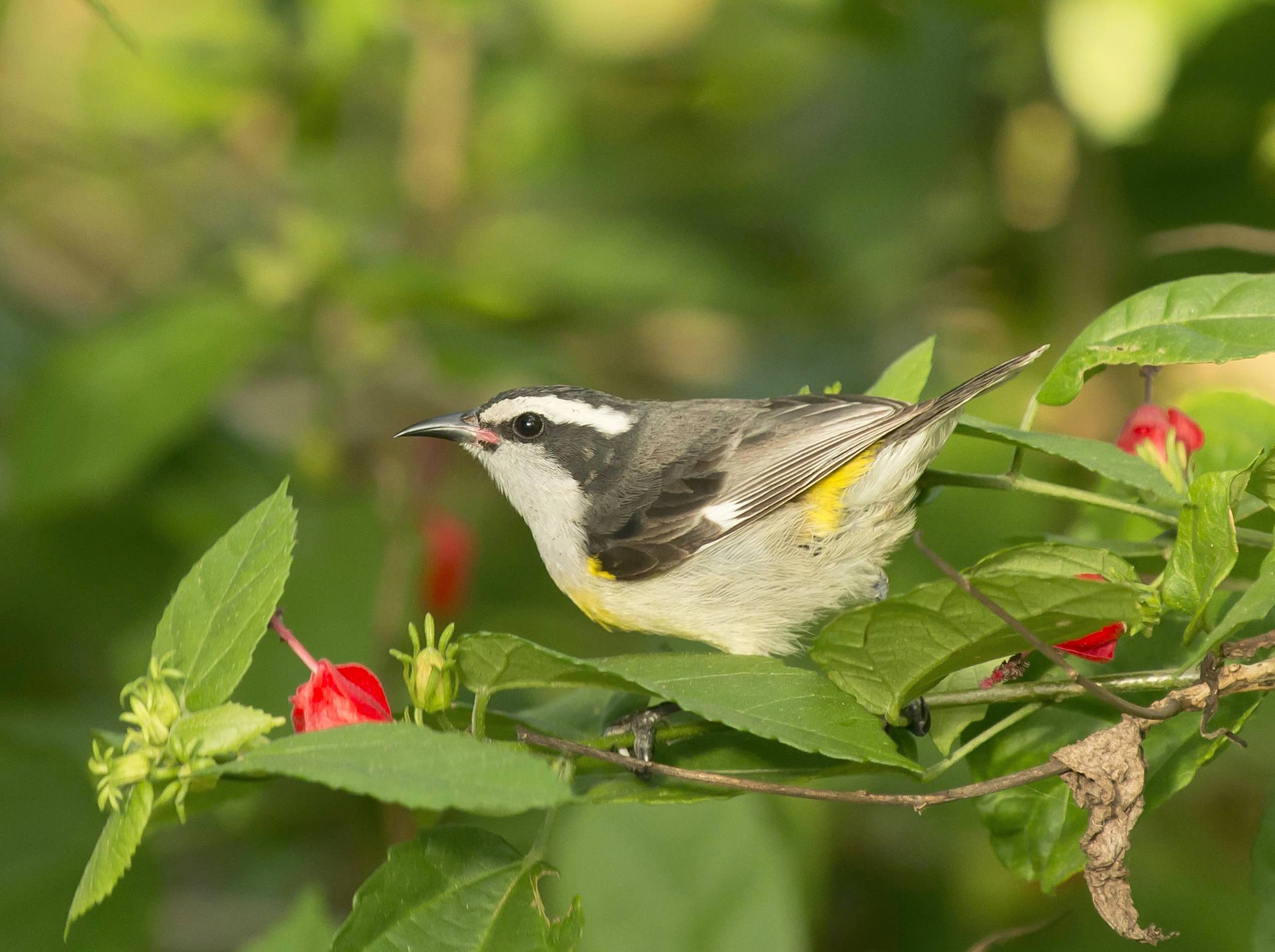 Elsewhere there are doubters, sceptics, and champions of other group inclusions. The most obvious beneficiaries of all this will be dedicated birders, who may end up with two extra species to add to their ‘Lifer’ lists. Personally I’d like to think that the birds themselves will stay ahead of the curve in their own category, maintaining the mystery of their precise status while humans argue about what to call them.

Bananaquit perched on yellow elder, the National flower of the Bahamas 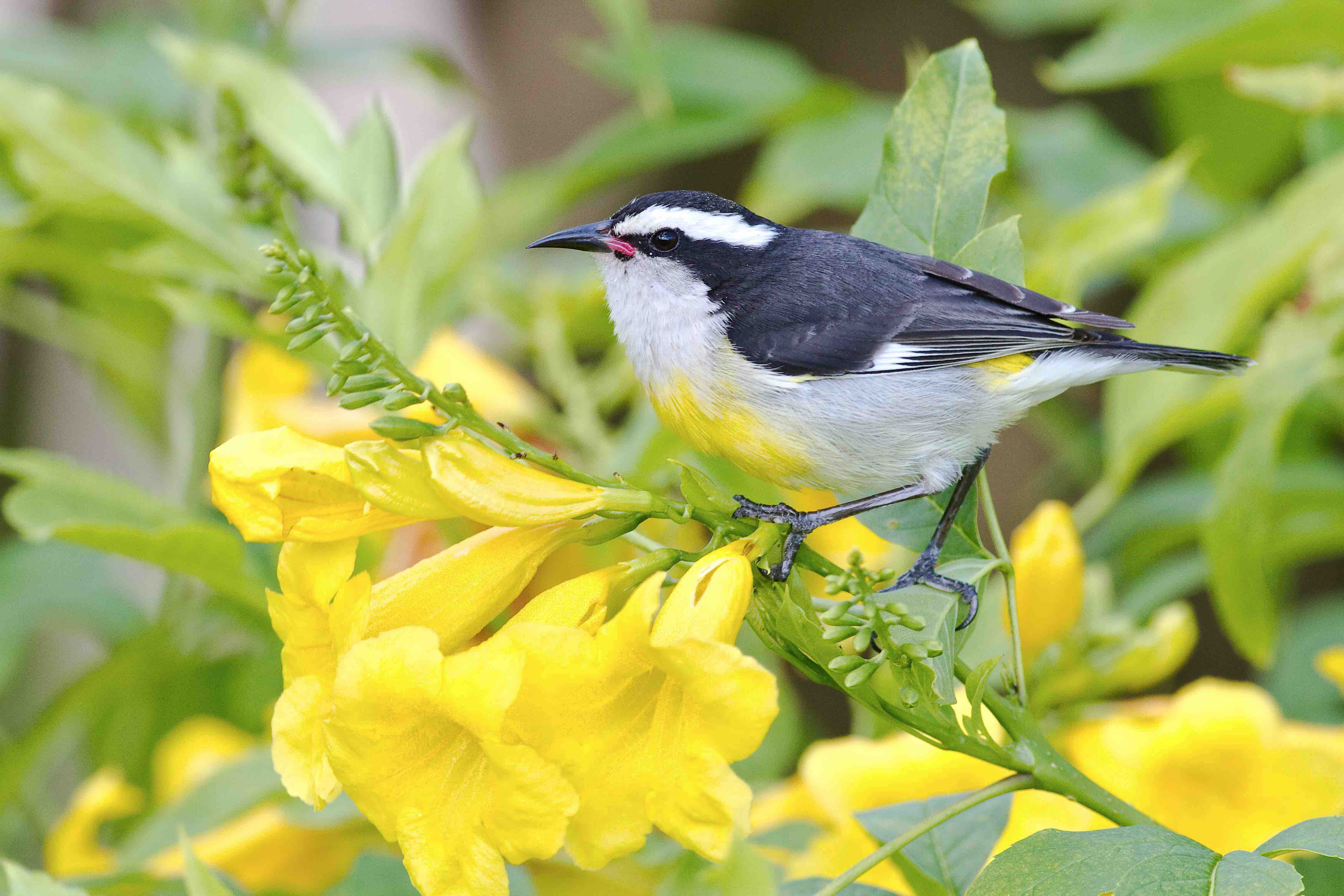 LOGGERHEAD KINGBIRD: LORD OF THE FLIES

Four principal so-called ‘tyrant flycatchers’ (Tyrannidae) are found on Abaco: the loggerhead kingbird, the gray kingbird, the La Sagra’s flycatcher and the Cuban pewee. These are common permanent residents, except for the gray kingbird which is a summer resident only. Several other flycatcher species are found on Abaco, but they are very uncommon winter residents, rare transients, or vagrants.

Loggerheads seem to have two methods of observing humans and their mysteries. One is by perching on a branch or in a shrub, watching intently. They stay quite still… until suddenly launching into the air to intercept some passing insect with their hooked beaks (so-called ‘hawking’), before returning to their perch. And staring at you again. The other method is to follow you round, either flying slightly ahead as you progress; or fluttering in the coppice alongside you; or playing catch-up from behind. 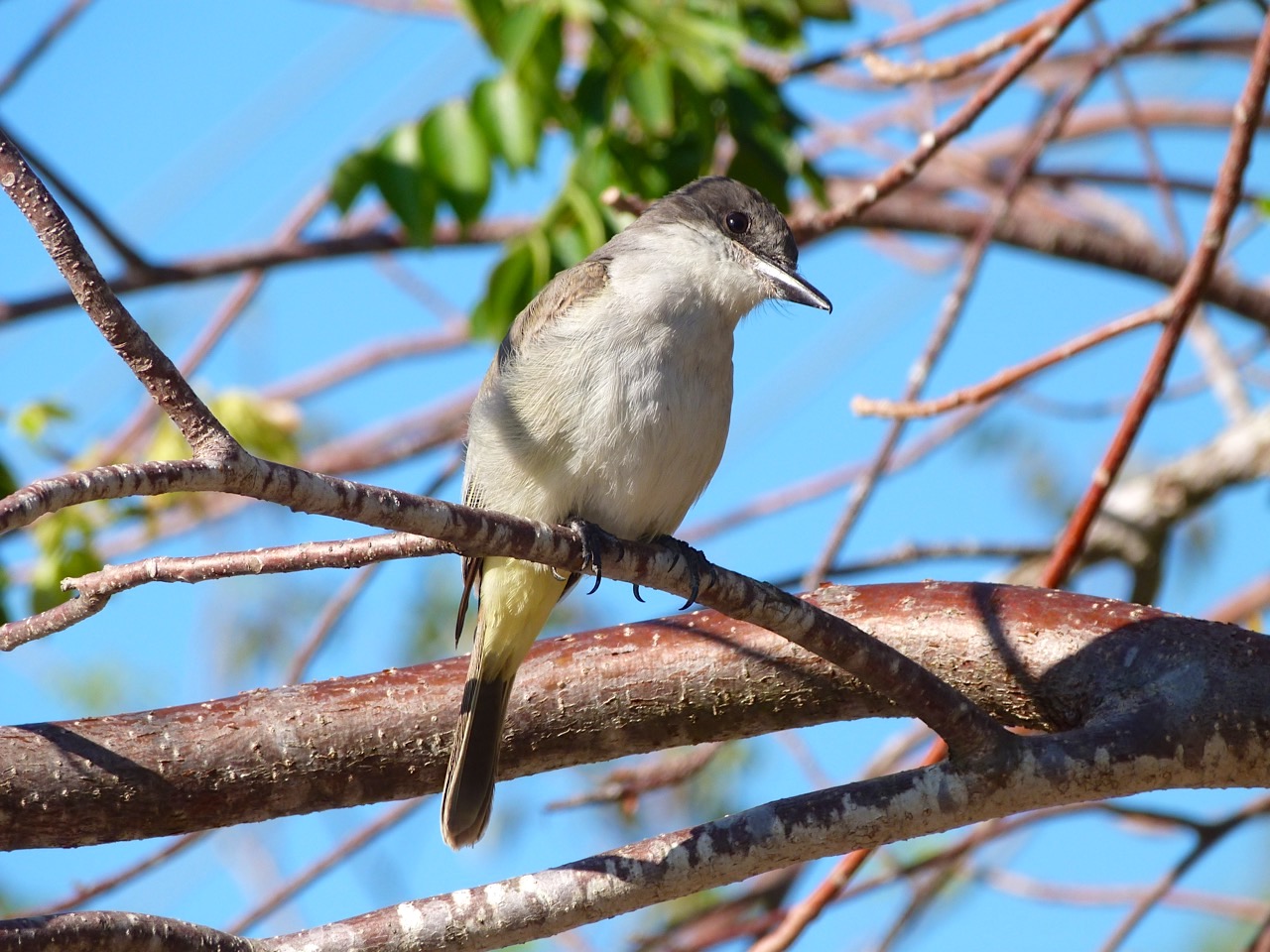 A typical quizzical loggerhead sideways look… all flycatchers do this

The collective names for a group of kingbirds are: a Court, a Coronation, or a Tyranny

There are 37 warbler species recorded for Abaco. They fall into three distinct categories. Surprisingly perhaps, only 5 species are permanently resident on Abaco, ie non-migratory. Then there are warblers that commute from the breeding grounds of North America to warmer climes in the Fall, returning in the Spring to breed. Some will be familiar – PALM WARBLER, AMERICAN REDSTART, BLACK-AND -WHITE WARBLER. Others, like the HOODED WARBLER, are less common. One or two are very rare indeed, such as the KIRTLAND’S WARBLERS that choose Abaco as a winter destination. Finally there are the so-called transients, warbler species that use the northern Bahamas as a stopover during their longer migratory flights, such as the BLACKPOLL WARBLER.

The 5  permanent residents don’t migrate, so there is a chance to find them year round. The pine forests will generally be the best place to start the quest. Importantly, 2 of the 5 species are endemic birds to the Bahamas and can be found nowhere else: BAHAMA YELLOWTHROAT and BAHAMA WARBLER. The latter and the OLIVE-CAPPED WARBLER, are very range-restricted, and only found on Abaco and Grand Bahama. 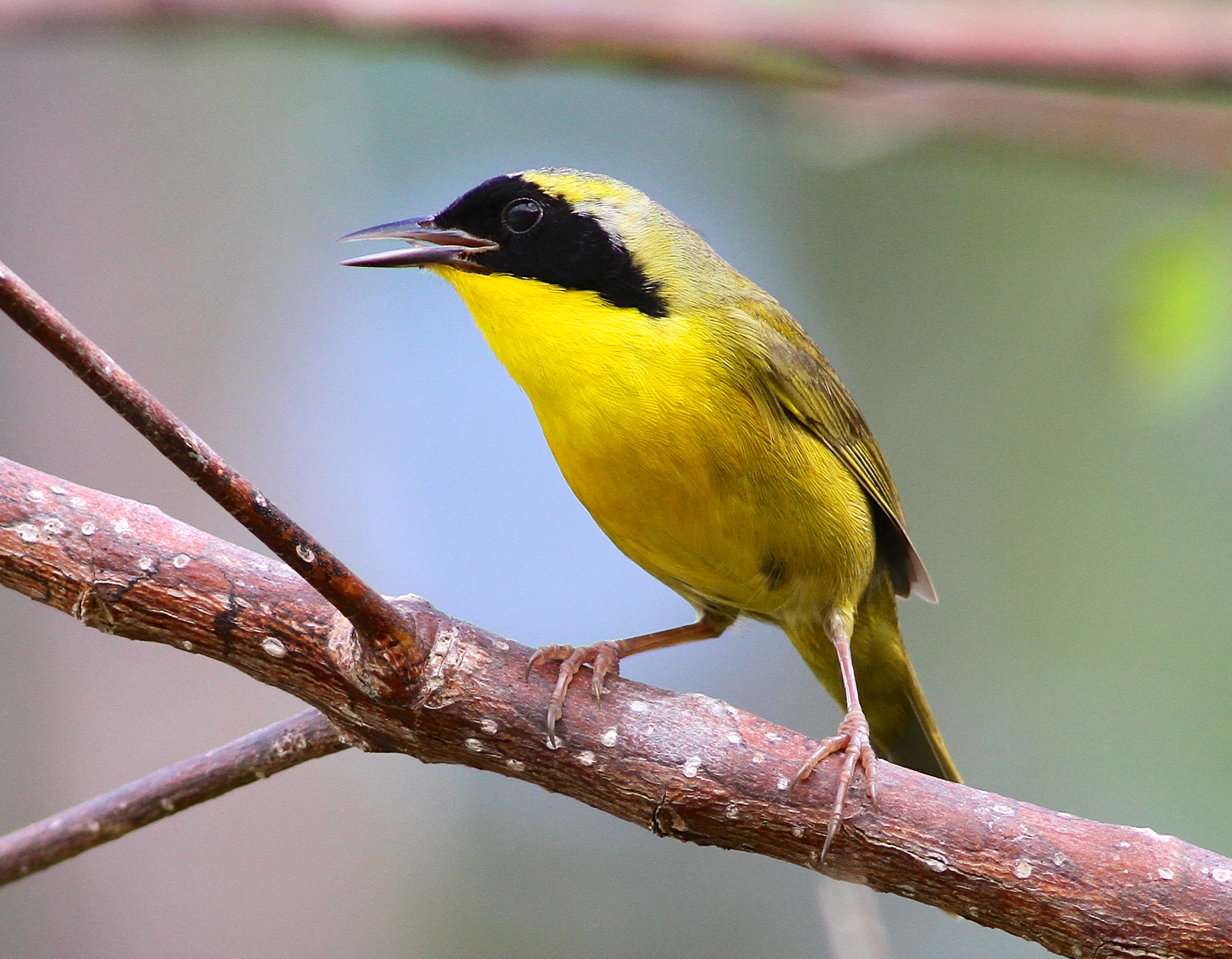 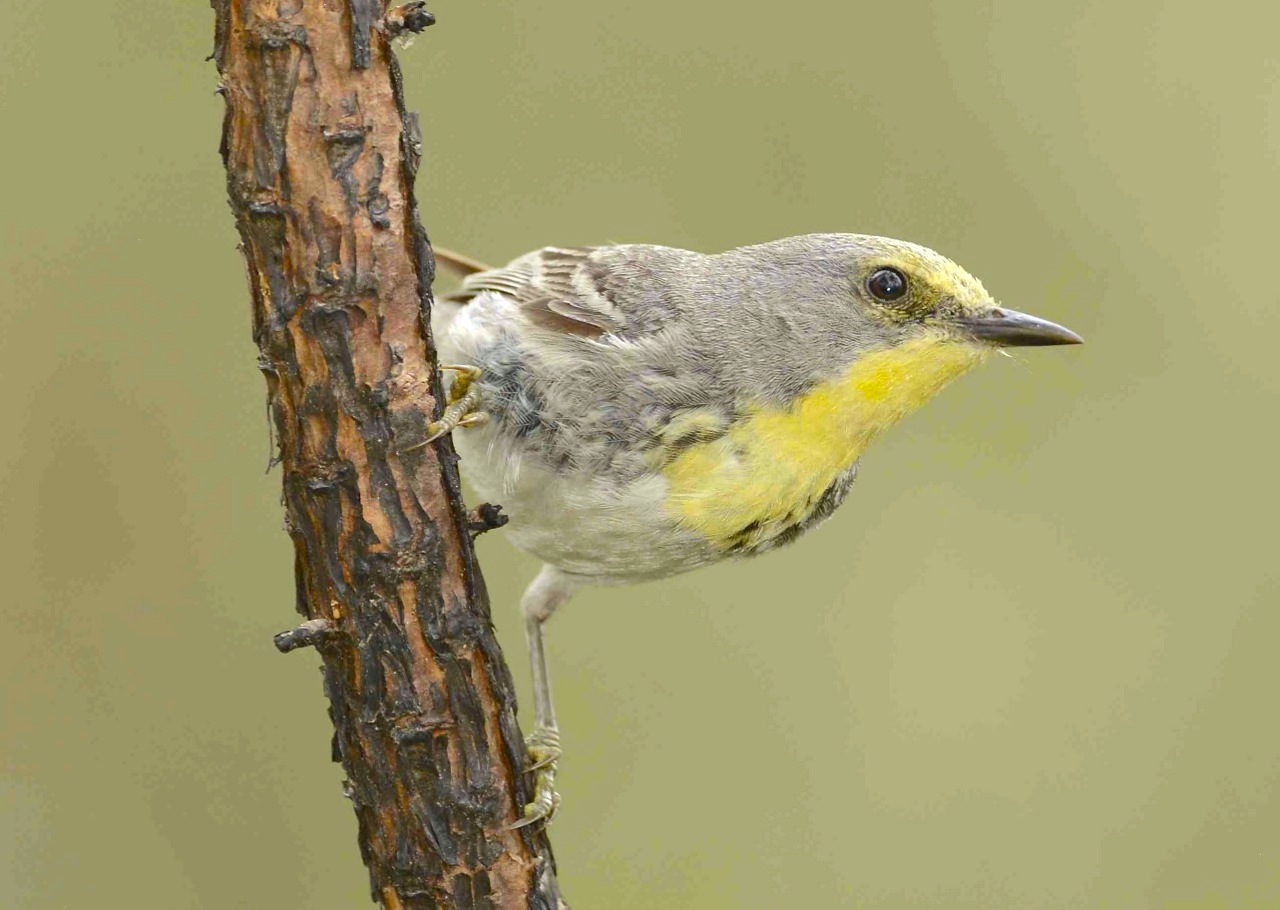 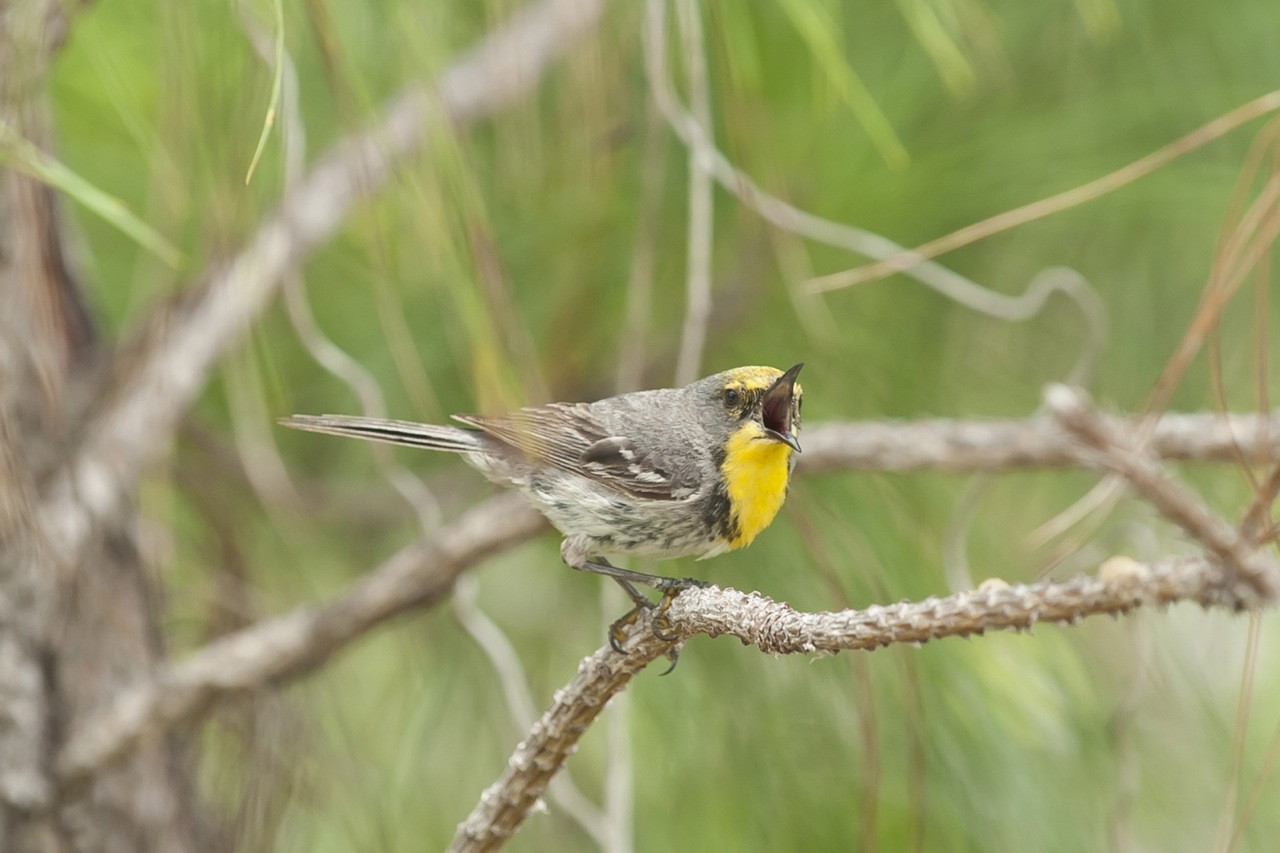 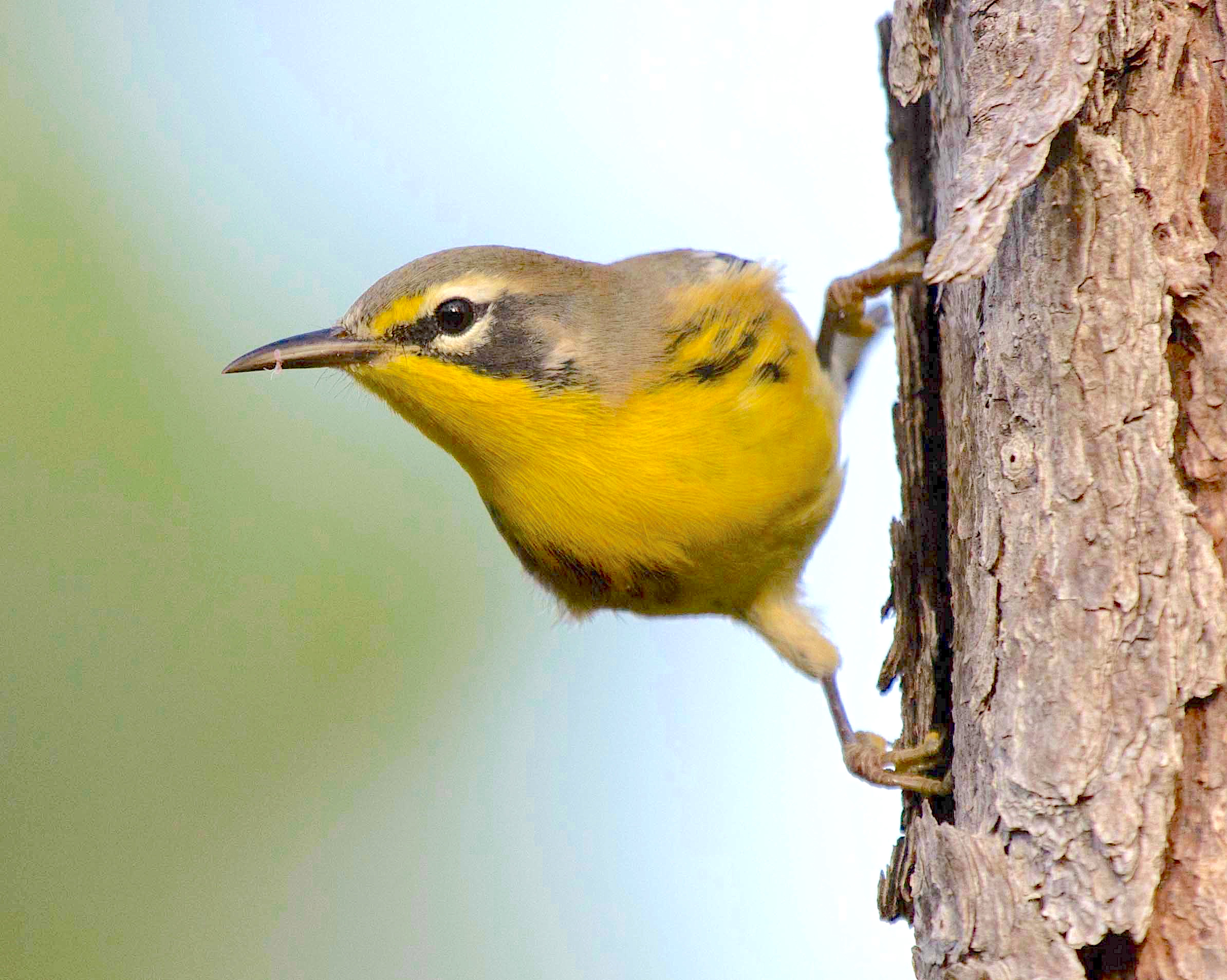 The Smooth-billed Ani (Crotophaga ani) – aka Cemetery Bird – is the third member of the cuckoo family found on Abaco, the others being the MANGROVE CUCKOO and the YELLOW-BILLED CUCKOO. You can (it’s voluntary) find out more about them in an earlier article HERE.

I have returned to these engagingly gregarious birds and their raucous ways because Paul Harding has recently captured a sequence of  a small group of anis behaving so endearingly that they are irresistible. Not for them the oddly incompetent fluttering flight, nor the disorganised, unbalanced landing technique. It’s simply a matter of getting settled on a branch, and then making room for one more in the middle (or perhaps resisting it…).

There were 4 on the branch…

Hey – make room for another one… 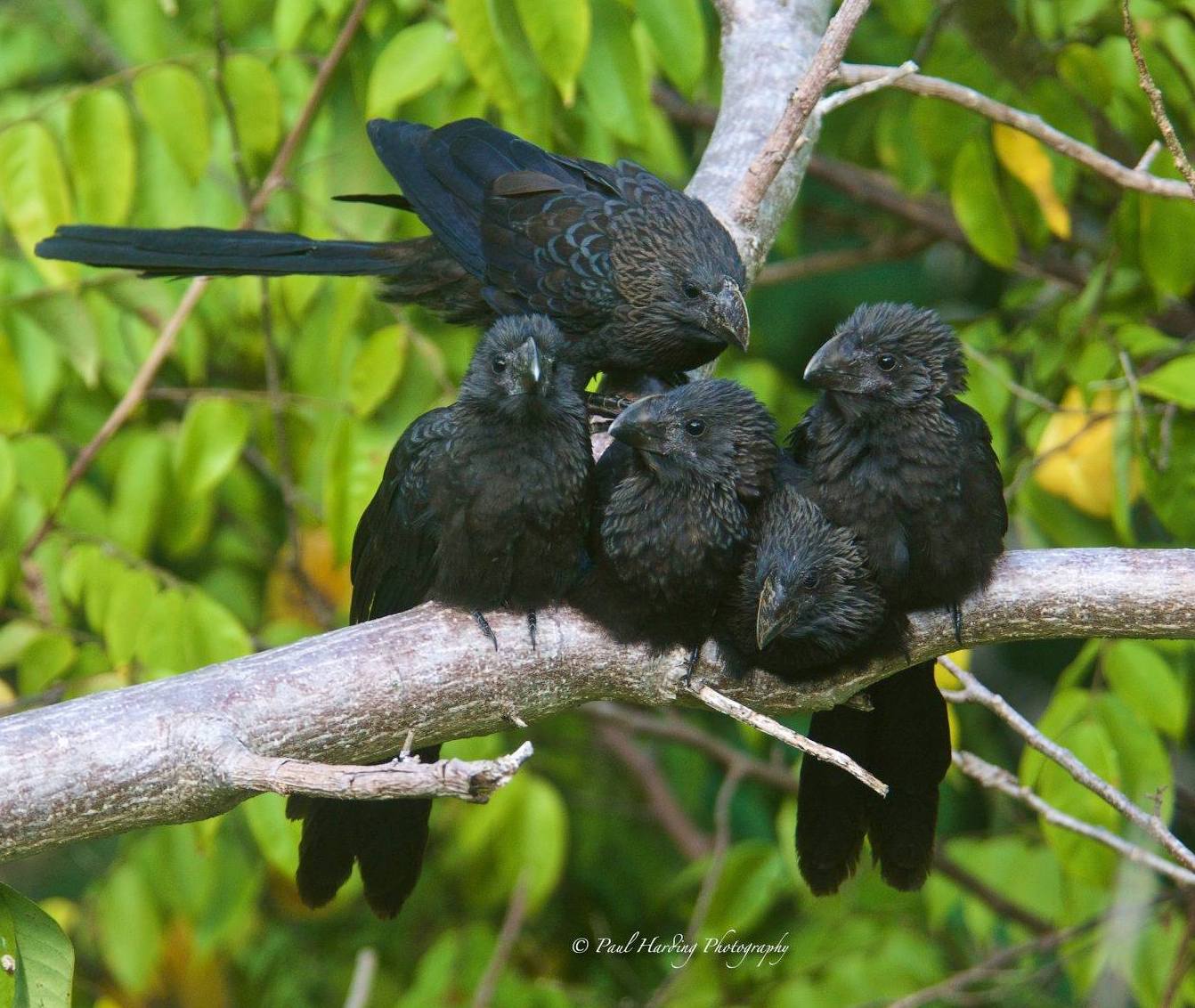 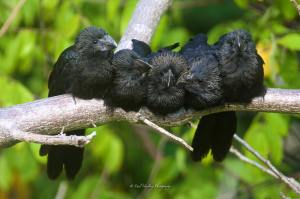 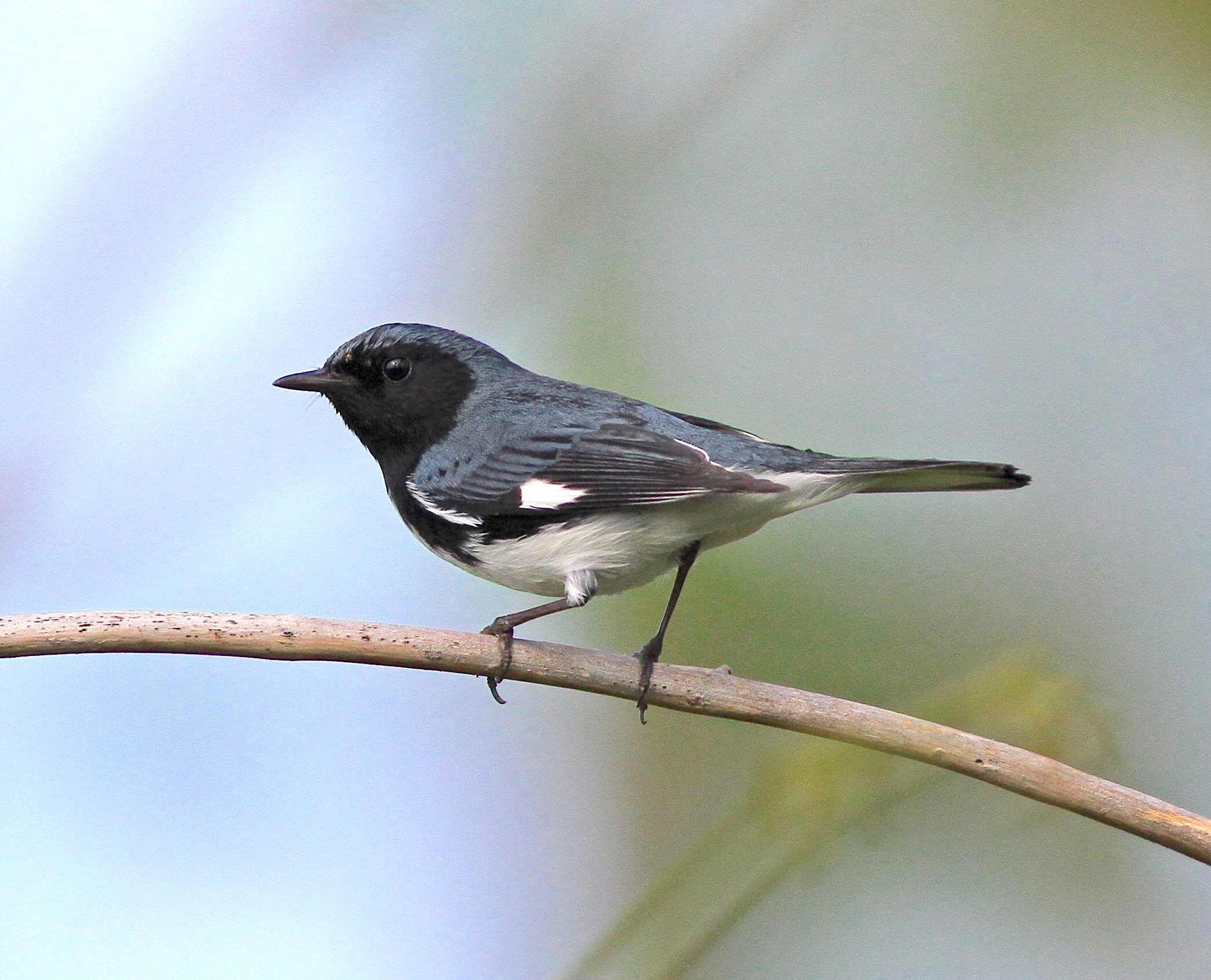 It’s warbler time of year on Abaco, and a good time to take a look at the Black-throated blue warbler Setophaga caerulescens. This small warbler has very particular breeding and overwintering ranges. In the summer they are found in the forests and woods of eastern North America. As the Fall approaches, they start to migrate south to the Caribbean and Central America. Abaco is one of their winter homes, as well as a likely transit stop on their way further south. Right now sightings are being reported on the mainland and the Cays. 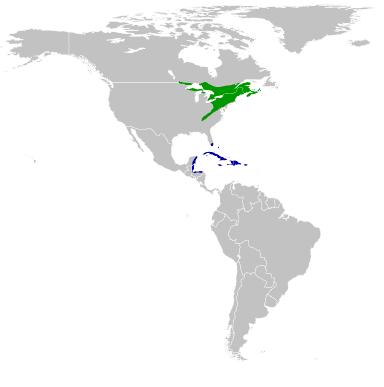 WHAT DO I LOOK OUT FOR?

Males and females are quite different in appearance (‘sexually dimorphic’), and could even be mistaken for distinct species. Males are a deep slate-blue above (hence caerulescens) with a striking black face and throat, and white underparts. They are unmistakeable, and unlikely to be confused with any other warbler. Females are basically grayish-olive above and pale yellow underneath. For ID, look for a white stripe above the eye, a pale arc below it. In addition, both sexes have a diagnostic white patch on the the wing. 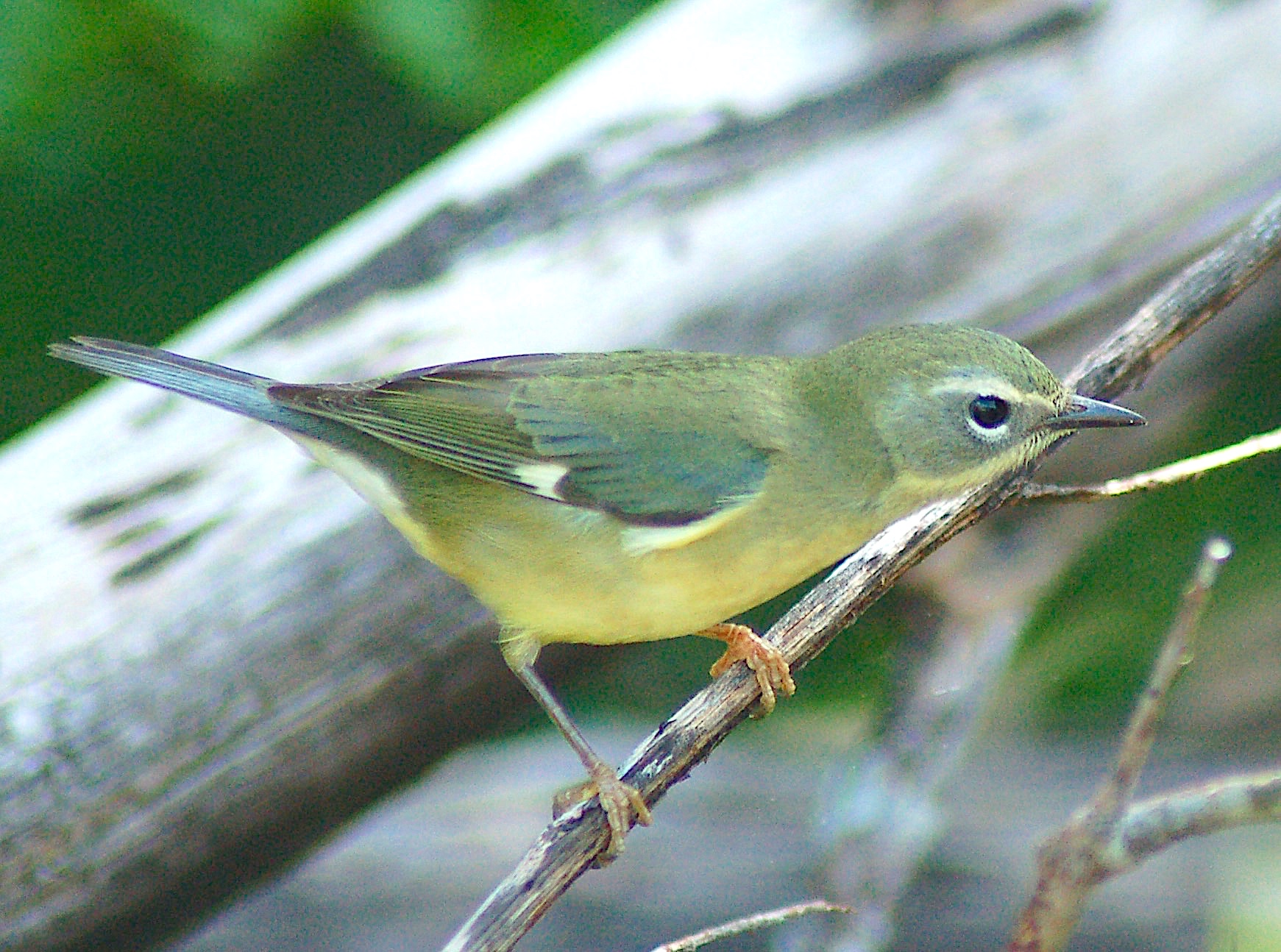 These pretty warblers can be seen in gardens, coppice, and woodland. Although mainly insect-eaters, sometimes catching them in flight, they also eat fruit and seeds especially in winter. BTBWs are territorial, and will defend their chosen space against all-comers, including their own species.

WHAT DO I LISTEN OUT FOR?

One source asserts: “The bird’s song can be described  as a buzzed zee-zee-zeeee with an upward inflection. Its call is a flat ctuk”. See what you think…

BTBWs are fairly common birds within their range, with a large population. The usual stuff is happening with them in terms of habitat destruction & co at both ends of their migration. For some already threatened species (e.g. Kirtland’s Warblers), habitat degradation at either end of the migration (let alone both) presages a downward spiral in population. With BTBWs, I have read both that the population is decreasing; and in another source, slightly increasing. For now, let’s regard the welfare of the species as being stable. However, the current causes of species decline will doubtless continue, and many regard increasingly evident climate change as being a determining factor for the well-being of migratory species. The birds are not yet out of the woods, so to speak… and maybe never will be.